On the Obtaining of Putters

Lea and I lived in a condo. Lea was allergic to cats and dogs, so we didn’t have any pets, just lots of plants. One day in 2006, Lea thought it would be fun to volunteer at the McLean County Humane Society. So we did, and soon went weekly to spend time with lots of cats. Lea gradually got a resistance built up to the cat dander, so she wasn’t quite as allergic.

Some of the adult cats had been there for quite awhile. People wanted kittens more, so the adults took a long time to be adopted. Lea felt sorry for one in particular. It was a large (14 pounds), black Maine Coon mix, named by the shelter “Tammany.” She had been rescued from Hurricane Katrina and flown up to the shelter along with a number of other animals. Tammany was the last one, and had been there a year. We asked about taking her to the observation room, and were told she didn’t like being picked up, so we put a laundry basket down, she jumped in, and I carried her to the room. She jumped out and explored the room, seemingly ignoring us, as cats will do. Lea said, “There’s two humans in the room,” and to her surprise, Tammany jumped up on the bench where Lea was sitting, got on her lap and looked her in her eyes. Then she came over to the other bench where I was and looked at me. We decided to adopt her, and filled out the required paperwork.

A shopping trip to Petco was in order, as we had nothing in the way of cat items. I went to pick her up with a nice carrier. It was the end of October so I had a large towel to cover it with. I put the carrier on the floor, and Tammany wandered in. She meowed the whole way home.

I brought her into our spare room, where the litter box was, and opened the door. Tammany came out and went all over, sniffing, marking, and acting just like a cat in new surroundings. That night she was a rather pestiferous puddy, jumping on the bed a lot, laying on Lea and purring up a storm. We got the idea she was a happy cat. We don’t call her Tammany, but rather “Putter.” (After Tweetie’s saying, “I taught I taw a putty tat!“).

We read a lot about cats, and decided she needed a companion, so kept checking out the cats. One day last July (2007), we found one which seemed to fit the bill, and brought him home. He was a stray they named “Neo.” We call him “Neo Kitty.” He was seven months old. He might have some Maine Coon and/or Himalayan in him. It took Pudder about a month to accept him; there was a lot a hissing, etc. at first. They have lots of cat fun chasing each other around. We’ve had to make a number of modifications to accommodate them, as cats do tend to take over, and rarely take “no” for an answer. But we enjoy them, they are well-behaved, with an occasional hairball, compliments of Pudder, but they give us lots of laughs, and are well worth the care.

Two kittens were added to the cattery in August of 2008. Moshe and Aaron. They are Ragdoll/Himalayan mixes, brothers. We took them both. We couldn’t separate them because they were having fun playing together. They’ve blended well with the other two cats.

We moved to our present house in May of 2009, which gives us all much more room. The cats now have a huge fenced-in back yard and a cat door in the kitchen storm door, so they can come and go as they wish. 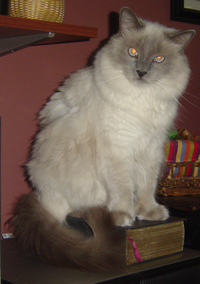 I am Aaron Cat Buddy. 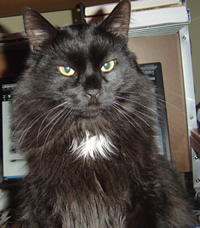 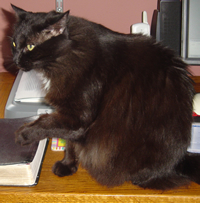 I am Pudder Cat, the Queen of the House. I am a Katrina rescue cat. 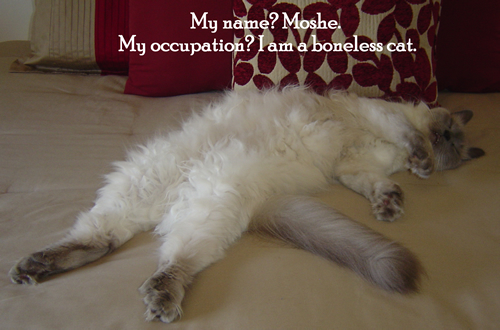 Moshe is Aaron’s brother. They are Ragdoll-Himalayan mixes.