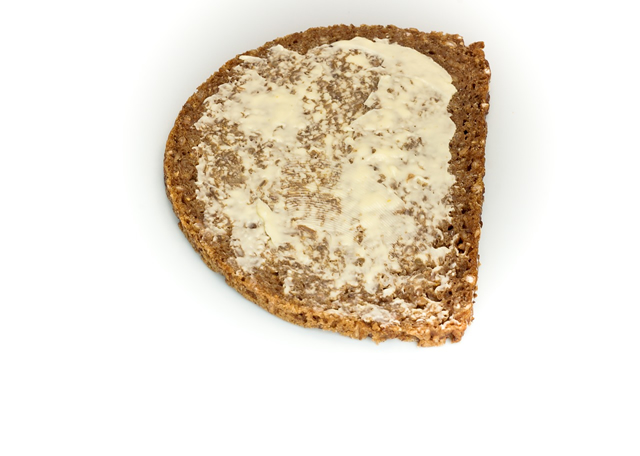 From the Usenet Oracle.
Now called The Internet Oracle.

The Usenet Oracle has pondered your question deeply.
Your question was:
If you drop a buttered piece of bread, it will fall on the floor butter-side down. If a cat is dropped from a window or other high and towering place, it will land on its feet. But what if you attach a buttered piece of bread, butter-side up, to a cat’s back and toss them both out the window? Will the cat land on its feet? Or will the butter splat on the ground?

And in response, thus spake the Oracle:
Even if you are too lazy to do the experiment yourself you should be able to deduce the obvious result.
The laws of butterology demand that the butter must hit the ground, and the equally strict laws of feline aerodynamics demand that the cat cannot smash its furry back. If the combined construction were to land, nature would have no way to resolve this paradox. Therefore it simply does not fall.That’s right, you clever mortal (well, as clever as a mortal can get), you have discovered the secret of antigravity! A buttered cat will, when released, quickly move to a height where the forces of cat-twisting and butter repulsion are in equilibrium. This equilibrium point can be modified by scraping off some of the butter, providing lift, or removing some of the cat’s limbs, allowing descent.Most of the civilized species of the Universe already use this principle to drive their ships while in a planetary system. The loud humming heard by most sighters of UFO’s is, in fact, the purring of several hundred tabbies.The one obvious danger is, of course, if the cats manage to eat the bread off their backs they will instantly plummet. Of course the cats will land on their feet, but this usually doesn’t do them much good, since right after they make their graceful landing several tons of red-hot starship and ticked-off aliens crash on top of them.